The report from JBA Consulting gave three options :
1. Holding flood water in the first lake.
2. Holding flood water in the second lake, and
3. Holding it in the natural valley to the NE of Blind Lane.
At a meeting with N&SDC, Oxton Estates and the Parish Council the third option was favoured as it involved less cost and held the water outside the village. Accurate information was not held by JBA, but this has now been provided by NCC. The next stage will be a full survey of option 3 by JBA and N&SDC are seeing if they can fund this from existing resources.

Coping with the problem

The village flood plan has come a long way since my July report and is now almost complete. When it is finalised a summary of it will be posted on the website. Currently the flood committee members are collecting names and contact numbers of those who were directly affected by the 2007 flood so that they can be alerted in good time by the flood wardens should the unthinkable ever occur again.
Jeff Swindin
9.1.12

Below are the conclusions and recommendations of JBA taken directly from their report and further details of the favoured option 3.

This option assumes the Oxton Ponds will not provide additional flood storage than their current conditions. If this is the case, it is proposed that the area upstream of Blind Lane could form a flood storage area, with flows through the Blind Lane culvert restricted so that they do not cause flooding in Oxton and reduce the likelihood of the upper and lower ponds overtopping their banks. This would be achieved by reducing the flow capacity of the culvert beneath Blind Lane, which will cause excess flows to back-up upstream. The diagram below shows a conceptual representation of the scheme. 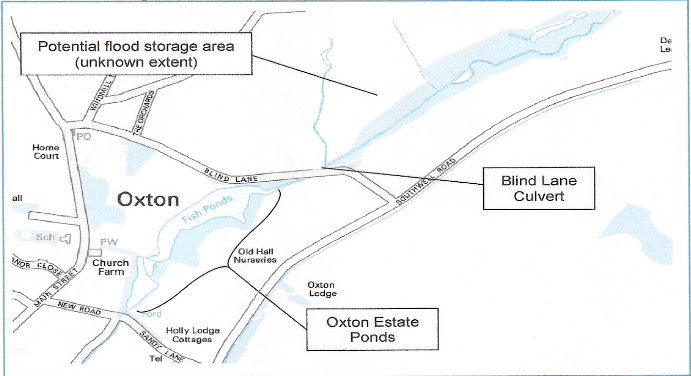