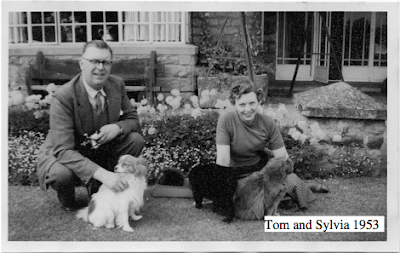 “We had a factory in the North and we had to build another one at Daybrook and we wanted to have a house near of course, so that my husband could travel daily. Coming up here towards Southwell it was such a lovely run up by the Hundred Acre, and we said ‘if only we could find something here’. There was nothing at the time, and then after a year or two we saw the Darwin’s house [Marsett House] being built at the top of the hill. Mr Franklin who was the agent on that Estate, said, ‘I’ll see if I can find some land for you, I’ll ask the farmer’. [We bought 4 acres]. My husband was the architect and we said [to Mr. Nix, the builder] we would like one in stone if possible because I come from a district [Tamworth in Arden] where we have stone. So he said, ‘well the stone is very easy for us, it’s local and it’s just as cheap as brick too’, which was rather convenient. So they started on it. That was 62 years ago. It took some time to build, but we enjoyed it. Then we planned the garden ourselves, we had a gardener. He did all the digging, we levelled the lawn, which was rather a big job. I planted most of the trees myself, I’ve always been keen on gardening. I did all the little hedges to begin with and then later on we replanted them with yew. We had a series of gardeners over the years of course. Chris [Bramble] has been with me now over thirty years”.

“The dew pond [in the garden] has been there generations I should imagine. I think in the next field there’s another one and I think all along the top of the hill. The farmers would make them then to help their cattle. We found it and we dug it out to clear it. There was some straw and all sorts of things in it”.

“It must have been just before the War when we moved here because somehow I remember sitting at breakfast, and it was announced that war was being declared. I remember that moment as, ‘oh my goodness what’s happening’. We had four boys [evacuees] from Sheffield, they were all about ten. They had to walk to the village to school, and so yes, it was quite an experience. They were here quite a long time. I found them difficult because they were town boys you see, and they’d no idea of the country. I said, ‘would you like to go and have a bonfire or climb trees, and after about half an hour or so, they’d say,’ what can we do next’. It nearly drove us mad, because with my brother, I’d been used to boys, they were always busy all the time. My husband [Tom] said, ‘oh why didn’t you have girls'”.

“A plane came down in the field opposite. It was a bomber. We managed to collect the local doctor and plodded across the field to the plane. Meanwhile shots were coming off. Oh, it was rather frightening. I think it mentions in that letter [from the Air Ministry] how many survived; I think two died. The pilot we had up here, and two others. We were rather cross because they were so long sending help.”

” I got [patterns for slippers] from a factory, thick material it was. I used to cut them up and make [them] into slippers. We had a little sewing party, I think it was about once a week. Mrs Darwin and all these people used to come and we used to stitch them up. The men were very glad to have them, you know it was the hospital that they went to”.

“The Nursing Association wondered if [I]’d take over, more or less. Well, I thought perhaps I would, which I did and of course I was running that for a very long time, until the National Health took over. In fact we continued I think for a year under the National Health. I ended with three nurses, and three cars, and [dealing with] four villages. It was quite a big thing, really. The nurses all used to come and report to me, [and] that worked very well. Nurse Grainger was one of the nurses, she was a wonderful nurse. They had very good service. We had chiropody once a month in the little hut before the village hall was built.”

“We realised there wasn’t [a W.I. in Oxton], people were very keen on the one at Epperstone and it seemed a shame that we hadn’t got one too. I asked Mrs Hopkin [Tom Shipsides’ daughter and mother of Kathleen Crow] and one or two around if they were interested and they said they would be, so I got in touch with the headquarters in Nottingham and we started one, and it did very well really. Last year it was 50 years old.”

“My husband said that it was time we had a village hall. He said, ‘ people like to be involved themselves with regard to paying for it’, so he said ‘if they could raise in the village, £2,000 I’ll do the rest’. So that’s what happened. We enjoyed doing that. I still am chairman of the Village Hall Committee, and I still get involved in everything, which is nice” “[After Tom died in 1970], we had an election [for the Parish Council] and so I put my name forward and I got on it. I think I got the highest marks if I remember rightly. [Mrs. Bell later became Chairman, and also a member of Southwell Rural District Council]

“[Lord Charles Cavendish Bentinck] used to come up to us when we had a programme on television that he liked. He liked ballet and cricket, so he would say ‘can I come up’? He used to have an electric chair if I remember rightly, and he used to come up in this. He wouldn’t let us fetch him. Then I know Tom used to wait until he’d more or less disappear at the top of the hill then follow to see if he was home safely. The funny things one did” 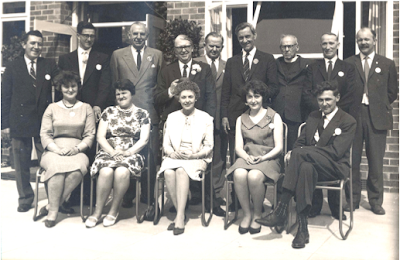