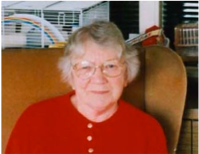 “[My mother died when] I was about one or two days old. I went to Nurse Knight, the old District Nurse, because I needed some massage on my shoulder and I’ve been told that Sherbrooke’ s chauffeur used to take me for that. Then I went to live with granny [at 1 The Brambles] ‘til I was something like three and by then my dad had got married again and I had to go up to Pinfold. Of course granny was opposite Doughty’s, and there was always something going off there. Mr Doughty used to shoe the horses. You could always hear him hammer, hammer with his leather apron and his cap and his tash. Les [Charles Doughty’s brother] would be making horse shoes and Mr Charlie Doughty and Mr Fred Whitelocks would be joinering and then occasionally they’d do the hoops on the wheels outside, and so of course there was always activity down the street. That’s what I missed [at Pinfold], it was so quiet.I was always very pleased if my mother wanted me to go to Mr Martin for yeast which was right down Water Lane. He was the baker and he used to come round with his cart and horse with bread with big wicker basket and on a Saturday, I think it would be, he made buns. We used to say ‘he’s stood at the top of the hundred acre to throw the currents in’ because there often wasn’t many currents in. But of course when it got to war time he wouldn’t be able to have them would he?”

“There was lots of small farms, and farmers were taking the cows to and fro. There was Turners with their cows in the pleasure ground here or at the bottom lawn on Fallows Lane. They always seemed to have a lot of cows, and they used to wait right down against the road to go for milking and I’d occasionally gone in the farm yard for milk from them, as well as to the house [Home Farmhouse]. That was so clean, it had got that clean smell. Ethel Turner used to come round on a push bike with the milk on the back and push it out in jugs with a ladle, a proper pint measure”.

“I went from Pinfold [Cottage on Forest Road] at the edge of the village to school and back again at lunch time and back to school. Ooh it was quite a big school. I should say forty, perhaps but more or less the whole village went to this school so you knew everybody. There was a lady who lived at the Manor, Mrs MacLean, a very wealthy lady, gave us a school party at Christmas. And at school we used to have milk, a third of a pint of milk. I think I must have always drunk mine ‘cos I like milk. The nit nurse used to come. At play times we used to play a game called ‘stringy’, that’s, you’d run round and catch one and they’d hold hands and you’d run and catch some more ‘til there was a long string of you. The girls used to sit a lot in the corner of the playground down against the road and the Manor side, ‘cos there was a tree there and there used to be different games. I can remember ‘hooley fooley come to schooley, pick me out’ [and] ‘edy idy over over, somebody’s in the clover’. I can remember some of the children used to play marbles on the road side. We had resident road sweepers then Mr Janson from Epperstone and Mr Len Barker from Lowdham, and my gran used to mash for them, mash the drink for them”.

“My dad used to have this pig, Fred Caulder used to come and kill it and my mother had to get a big brick of salt, and me dad used to then salt the pigs, salt the flitches, did he used to call them? Women wasn’t allowed to do that job or it would have sent the meat bad, some superstitious reason. My mother used to render the fat down for lard and she used to make pork pies. They’d hang [it] up in the kitchen, there was hooks in the ceiling and my mother cut it off as my dad wanted, it was very, very fat, too fat for me. Granny had hens, few hens. I sometimes used to go and collect the eggs for her”.

“The Co-op. used to come round. Mr Hill used to come round on a Saturday with your order for the next week and you’d pay him for what you’d just had, and also if you put any money in the Co-op. Society. The groceries used to come, wrapped up in brown paper and tied with string in a covered in sort of lorry. Mr Fox must have had loose buns as well ‘cos he used to give me a bun with pink icing on. When we were rationed my mother split her ration books, some at the Co-op. and some at Mrs Brown’s [corner shop, New Road] so she’d trade with both then you see. I’ve been told that people used to walk from the workhouse at Basford through Oxton to the workhouse at Southwell and they used to call at Lizzie Borewood’s. It was Berridge’s shop later, and she had the Post Office as well, and she had authority to give them some food as they passed through the village”.

“Corner Cottage [was] where my Auntie Marian lived, she used to do school dinners. The night before bonfire night was called the ‘mischief night’ and one morning when she was going to school she opened her gate and it had been lifted off the hinges and she went full length into the road. Mr Fenton, he was the headmaster at the time, was very cross with the children for doing that”.

“Mr Wesley Richardson had an allotment, and he had a daughter who nowadays [would be] called ‘special needs’. She was a big girl. I think her name was Doris but she was known as Bunny Richardson, and she was very, very strong and if Mr Richardson had to take, say, potatoes to set he got Bunny to carry them and they made a short cut up to the allotment by the side of the holly bush, which you can still see now if you know where to look opposite Pinfold”.

“The men that went to work at Nix’s all went down on their bikes. Nix’s was a very big firm. They used to have a fleet of little vans running all over the place and three big lorries. My dad drove one. Usually Mr Nix would let them have a lorry to fetch their own coal. Half of the people would be working on the farms, there was no business people hardly in Oxton, you could count them nearly on one hand. My dad was a special constable, Mr Richardson [and] Mr Saunders [also were] and they used to meet in the little hut. It used to be the police house, it’s been pulled down now. Mr Stirland was the policeman at the time and they used to meet there, I should think the idea was to go round the village making sure there was no chinks of light [during the black-out].

“[In 1942 I started] at Nottingham Dairy, down Castle Boulevard. I left here [by bus] at eight, got in town about twenty to nine and bus coming back was half past five. They were double deckers”.

“[I got married in1951 to Dennis Roe]. What was I, 22, nearly 23? I left [the dairy] when I got married. I couldn’t go right to Nottingham and feed my husband ‘cos he was a big eater, I used to be baking all Thursday and Friday afternoon, all afternoon, I’d be baking, baking cakes. [Dennis] came from Southwell, he worked at Nix’s. [We lived in the] Orchard just off Honeyknab Lane, one of Nix’s houses, went into it new. In the early years of me being married I’d bike to Woodborough for strawberries to make strawberry jam, half a crown a pound was considered expensive .I never made my own bread but I did a tremendous lot of baking, ‘cos my husband always used to take to work with him, sandwiches, boiled bacon. [Our] present house here was built in 1964 when Ann was five. We were working here [building the house] when they opened [the Village Hall] and we didn’t go down to the opening ‘cos we were busy working on here. [Dennis] played cricket.[That was the time that he was involved in building the new pavilion]. They always played friendlies at that time. [The ground was given by the Sherbrookes] on the understanding as far as I know, that if ever there’s not a cricket team the ground goes back”.

“They had the dances in the Memorial Hall once a month, oh great times they were, wonderful times. They could put the notices out in the villages round about, there was no drugs and no fighting, no getting drunk nothing like that, ‘cos the pub shut at ten then, you see. And then at Christmas time Uncle Les [Barmby] would help to decorate and in the middle there’d be a big square of holly and in the centre there’d be a mistletoe. Dare I say who used to step under the mistletoe and dance on a bit! They were wonderful times, wonderful they were”. 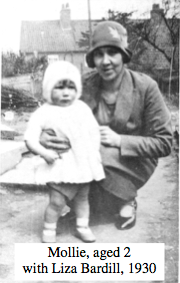