Fred and Les Strutt, brothers, living almost opposite each other close to the Bridge Inn.

“[We were both born] down Sandy Lane and [we both went] to Oxton school. When we lived down Sandy Lane they had no tap in the house, no drainage, we had to carry the water in and then we had to carry it by the bucket right across the road and chuck it down the drain because having children you’ve got to get rid of the dirty stinky water. And there were no lavatory, only a pan lavatory at the hall, no door on it, and it had a curtain, it would be a sack bag or something, hessian, hanging out. There were no electric, not while we lived down in that house, no water only a tap on the yard. We had a big dresser in the living room and my mother daren’t light a light, we’d only got candles and she’d be pulling clothes out trying to dress us like that and the house were full of mice”.

“We lived then top of the [Green] Dragon yard in a house, Lodge room they called it. It was three storeys high and that’s where Sherbrooke’s stored their furniture when they emptied the hall in 1937, for Lord Charles to come.. It was built in 1850 that building was. [There was a] dance hall cum meeting room [on the first floor]. There was stone steps and they went up from the inside; sometimes they built ‘em on the outside of those sort of building. Down below it was built for six houses when it were first built. Then when we went there they’d made it into four houses to make it a bit, bit more roomy. We went from there [Sandy Lane] September 1940 and we lived there for seven years. [We] left there 1948 and went up Forest Road to Godson Cottage”

“We had in school a shelter built at the side. And then there was a brick wall built in front of the east door so [if] the Gerrys did come or what have you, we had to go in there while the air raid had gone over. There was a search light camp you see over there, near the gas works [Nottingham Road]. They would give the warning siren. I remember the planes going over. We had to have gas masks and all like that, you know, and I can remember yours, yours had a Micky Mouse thing, and you wouldn’t wear the bloody thing anyway. Everywhere we went we had to cart them blooming things with us didn’t we in a cardboard box or if you was a bit better off you had a proper case to put it in. We’d swim down there [at Beanford]. Then they made it into fishery”

“They’d put two hours on the clocks well you know, when the war time were on, for two years, three years, and my mother couldn’t get us to bed at night really because it was still daylight. And we had to have blackout, green paper roller blinds, and she used to have to pull them down to make it look dark so we could sleep. And then these bombers would come over and with being in that big Lodge room [it] used to make an echo, make [a] sound like it were going to come down, ‘brum brum brum’ going over and they seemed pretty low.” 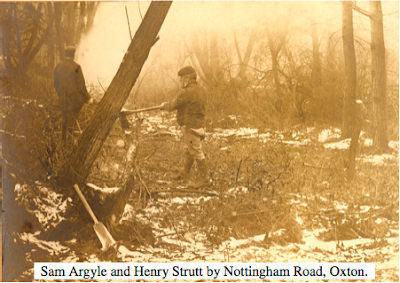 “There were four of us, dad and mother and me and Fred, so we’d have, I don’t know if it was a pound of sweets a week. We used to go to Captain Berridge near the Dragon, Dad’s uncle, George Berridge. We had to cut one strip out with the scissors each week when we took it, so you’d eat the lot that day or put ‘em in a jam jar and save them. I remember going in that shop there was a long counter, just through the door and all he got in that shop was a few jars of toffees on a table. There was a cupboard at the side of the fireplace where he kept tobacco and razor blades and that was it. My dad could only afford one razor blade a week.”

.”My dad started on the Estate when we was born. Oxton Estate never paid very good money you know. He’d be working in the woods, he were a woodsman. He was working at Oxton Estate in 1937, that would be the Jubilee because he had to put these seats out [for] Oxton Estate”.

“Everywhere [you] went you had to walk. I’d hear my mother talk, they’d walk to Nottingham through Calverton and over George’s Hill, there were no other way of getting there, There’d be lots of gypsies around in them days begging and mucking about. They’d be heading on for Arnold. Our dad can remember Sherwood being separate to Arnold, and it would be a place on it’s own”.

” There was a hermit, they said he was dressed in a goat skin and he made a house out of gorse between Oxton and Farnsfield. One of Bill’s daughter used to go and take him some grub down there”.

“We [both] worked at Moorfields Farm]. There were sixteen of us all together on that farm. Used to take us about an hour [to be paid] ‘cos the old man never made your money up on a Friday night so you’d got to wait. You’d got to remember how many hours overtime you’d done, and then he never give you an envelope, you had to sign the paper. If you’d got a hole in your pocket you lost the blooming lot didn’t you? In 1949, I got two pounds something, just two pound, and then the following year about two pound forty four. [In]1950, he gave me three pounds and that three pounds carried on then. They had two shire horses, Rattle and Prince. I always remember my dad worked there with horses when we came to Moorfield in 1945 and then probably 1946 they went and built a great big drill, didn’t they, what took about, I don’t know how many people. One horse bolted and dragged [him] down along the field and pulled all his shoulder, so he was off work quite a while because your muscles are different in your sixties. One day the horse stood and it wouldn’t move. My dad went to it and spoke to it, ‘come on Rattle’, and it pulled that cart out that yard just like that ‘cos it didn’t want to be ill-treated any more and animals know. Our dad had worked horses all his life. You had to keep talking to the horse,’come on, come on’, like that, and clicking to it. Then it’d behave itself. You’d got to talk to ‘em and then they’d pull with you that’s how the horse was to my mind anyway”.

“[A spinney was planted] off Forest Road, and that was to do with the Diamond Jubilee,1897. It was sixteen acres. It’s still there. It had larch trees in the middle, hawthorn hedge round it. But [today] you can see it quite plain, because Oxton Estate’s knocked more hedges down and trees and it stands out like nothing now don’t it?”.

“Garden Cottage was always a head gardener’s house when our dad grew up. I can remember seeing [the] sunken [garden], there was a path run under the window and it went down a good yard. Mrs Logue filled the garden in and the garage they made [into] stables. [Opposite is] Oxton School wall. When they built it in 1870 that wall was a criss cross design, holes all in it. They’d done that for the water to wash in and wash out so they knew it was a water hole [and therefore flooded]”.

“[When] the war was on we had to take tin cans and paper [to a collecting point in the Hall outbuildings]. We’d go through the archway and under the clock, and then there was [a] cow shed, years ago anyway. I think the stables were on the right when you went through the arch, carts and things on the left. Then it were the coach hut, where they kept coaches on the left hand side, and the horses on the right. Then straight ahead across the yard was where we took the rubbish into. Straight up there was another iron gate with S’s on. And you bear right [for the] laundry. The gate went through to get to the front of the house, to the front door. There was a great big place and it were full of coke, and it had got yew trees round it to hide it. And then the laundry was at the back of that. Then from the laundry that way there was several dairies they had, because they’d skim milk, make butter you see. There were several more buildings, you know, they were all plastered out. Then you got to the back door of the hall then onto that back yard. It was a terrible yard, it was always greasy and wet. There was some big doors that went down the cellar and they always looked rotten to me. Rubbish or bottles, it all had to be taken up there, to save for the war you see, couldn’t throw paper away because we never had dustbins. We had one tea party in there. And it weren’t nowt to do with Sherbrookes, it used to be Lord Charles with the evacuees, it’d probably be somebody’s birthday or somet like. It were only a bread and jam job”.

“Well there weren’t many cars and there weren’t many people who’d got telephones ‘cos we always had to go to the Doughty’s for a telephone if you wanted to ring up when somebody were ill or we wanted a doctor. They’d have one at the Manor, them sort of people, Doughty’s had got one, pubs had got one, Severn’s had got one at the shop because they, Severn’s shop was butcher’s shop cum post office. Then there was a telephone box, if you wanted to make a private call in the shop.. That were Severn’s, it’s amazing how everything was in that row because there was a butcher’s shop, post office, Severn’s had got about ten or twelve cows what went in every day to be milked, it all seemed pretty tidy all round there, you know. [There were] some holly trees at back of [Severns] house and that’s where Severns’s hens used to roost, all over there, them trees were full of hens, banties and everything. I don’t think they went in, they had a chicken house to go in but they allus roosted in them holly trees. Yeah, the holly tree is [still] there [by the village hall car park].” 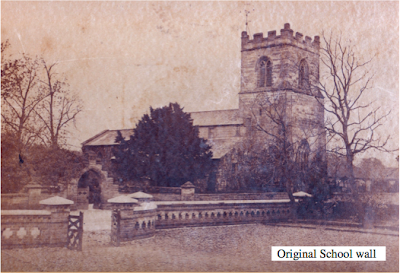 14 thoughts on “Fred and Les Strutt”