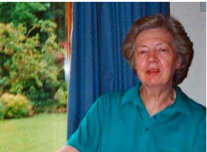 “I was born in Oxton, in Mildura House, Nottingham Road, the house was built by my father, I suppose 70-80 years ago. My grandfather had his building firm at Arnold and my father and I think Tom Bramble and George Bramble used to walk over with the hand carts or would come with the horse and cart and build a house. My grandfather and my father used to do a lot of the Oxton Estate work then, and we still do today in our family firm. I was one of four, [I have] two brothers and one sister, my brother and my sister still live in the village and my eldest brother Tom lives near Louth in Lincolnshire.

“I can remember the jubilee of King George V, in 1935. I do remember being dressed in fancy dress and going around the village in a horse and cart. I was pretty small, about seven. I can remember because I wore a green fairy dress. I also remember about the Christmas parties at the school. I believe it was Mrs MacLean who used to live at the Manor she would give a very nice party and there was also a school party, provided by the school. I do remember those because we always looked for presents under the Christmas tree. I used to walk to school and back and I used to go to the Sunday School.

[Husband] Bill’s father worked for the local hunt, the South Notts. Hunt, he was huntsman with them. Bill’s mother and father used to live where Mr and Mrs Rickers lived, it was two houses then. The Strutts were next door where the Teares live now. Tom Whitelocks lived at the corner cottage where Philip Neal lives because he had the cobblers shop and his wife Connie had the drapers shop. One was the cobblers with all the leather and with a very tiny room and then this end you had a little window with aprons and different things in the window and knitting wools, cotton and silks and what not. He left that shop and we built a bungalow for him across the road on his allotment. Also there was a tea room down the bottom end of the village [near the Bridge Inn]. Stanley [Taylor’s]’s mother and father used to live there. She used to do teas but she used to sell sweets as well, and I remember knocking at the door asking for a quarter of cream caramels. Mr and Mrs Shaw kept the Bridge Inn and they would sell chocolates. I do remember going in for a penny of boiled sweets. Mr Willis used to live in the housewhich is Sunnyside [Water Lane]. He used to have the market garden because I used to go with my mother to get vegetables”.

“We [had] the youth club, the Pioneers Club, I did join. At Christmas we always had a dance or a social in the memorial hall, We used to decorate it up for Christmas and it used to be lovely and we used to wear long dresses. We used to have the four piece band, I think it was Whiteheads band. Also we used to have some lovely dances in the institute, the old tin hut as you’d call it, and I remember we had country dancing with Mr Coleman, he used to bring his squeeze box. I wasn’t very old then but I used to quite enjoy it. Mr Coleman was Miss Hanson’ gardener and he lived at the cottages just above Mollie [Bramble], well where Reg Smith lives. Those cottages we built for Miss Hanson, one was for the chauffeur and one was for the gardener”.

“You either went to chapel or church, one or the other. A lot of people did go to the chapel. You could hear Mr Martin’s voice in the chapel particularly in the summer with the doors open, he had a very strong sort of raucous voice. Occasionally I would go to the anniversary service or whatever it was, but of course with going to the church you didn’t go to the chapel you see”.

“We didn’t have a television till about 1954. I think my brother had it for the Queen’s coronation. It was only a tiny one and I don’t think it was coloured, well it wouldn’t be would it?”

“[I left school] at 14. I went to town then to the community college in Nottingham. That’s where the W.E.A is today. [I was there for] two years. Then I worked for this firm in town for possibly a couple of years, I can’t remember the name of the firm, but they were valuers. I used to go on the 8 o’clock bus in the morning. Then I came back to our office then, and ever since”.

“We had about 50 workmen before the war. We used to have little vans. We used to have two lorries, Les Barmby used to drive one and Tom Bramble used to drive the other. We built a lot of the houses, Mrs Bell’s, 1935 and 1936, Far Leys, Deer Leap and Middle Hey, the Spinney and Red Lodge and then we started to build the house on Honeyknab Lane where David Paul lives now. That was before the war when they were built, and then after the war we built on the Orchard”.

“Before the war we used to have a works outing. I can remember there used to be a coach and we had all these sandwiches and cobs, crates of beer going on the coach and they used to have lunch at the Violet Café, I think it was, in Skegness. They used to look forward to that, it was quite a big day on a Saturday you know. We used to work on a Saturday morning till 12 o’clock so they would have the day off, that was quite an event”.

“[Bill] came to work, perhaps it was 1940, in the office. Then he left when he was nearly 18 and he joined up in the navy. [He returned] probably about 1949 I think. [We got married] in 1953 in the Oxton church. Prior to that we built our house in Honeyknab Lane, not the one I’m living in now, the one further up the lane, and we lived in there for about 13 years. Then we built this one, there was half an acre on the other house and Bill decided it was too much gardening, he couldn’t cope with it. He was working all day and then he used to go to evening classes and learn different trades on building and plumbing and he went to Derby and did refrigeration. Nearly always this was in the evenings so he didn’t have much time. So Bill learnt the trade at the evening class and of course he was working out on the sites as well until my father died [in 1968] and then we took it over. Bill enjoyed doing his work”.

“We were married about six years before Rosemary was born in 1959. Then Kate was born in 1963. It took us about 2 years to build [our present house], on and off”.

“We had the pony, Creamy, [when] Rosemary was about ten, and then we had another little pony called Choppy which Kate had, a smaller one. We used to keep them first up in the Pond Field up Honeyknab Lane, then we used to keep them [at] the bottom of Windmill Hill where there [had been] pigsties and outbuildings belonging to those houses that were underneath the Lodge House. The slaughter house was [further up at the top], it belonged to the Oxton Estate, you see. Creamy was 36 when he died last year”.

“[Bill] was [on the Parish Council]. He was [also] on the Church Council and he rang the bells from 1986. They also had to put the new floor in and [a] new frame and new bells. They used to go down to our workshop I think two or three times a week, they all enjoyed getting together and doing it”.

“Today you don’t know well half the people, sometimes you walk down the village and don’t see a soul, people are mainly in their cars today aren’t they, where as before they had to walk”. 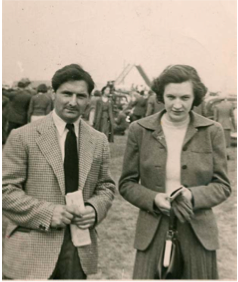 One thought on “Eileen Saunders”