Interview by Margaret Cooper in 2000 for the “Oxton Now & Then” publication.
Desmond Palmer, farmer, of Windmill Farm, Forest Road, Oxton. One of the last two tenant farmers on Oxton Estate.

“I was born at Lilac Tree Farm which was a farm then, not now, on Water Lane. We came here in 1947, 1948 when my father came out of the army”.
“It was tenant farmers then [on the Estate]. There were a lot of small farms around the village and they were all tenanted but of course things changed. I mean very small farms couldn’t make a go of it, couldn’t make any money I suppose, and it became fashionable for various reasons for owners and landlords to farm their own land rather than lettings. Consequently all these small farms disappeared and were taken up by the Estate [which] farmed the majority of the land themselves, but our tenancy was very firmly fixed in place so we’ve continued. David [Wilkins, the other tenant farmer] came [to Oxton] in the early 60’s. That was just before I really got going with my father here”
“I was never very keen on school. There were three classes originally when I was there, there was the juniors, the seniors and then of course the infants class as well. Mr Fenton was the head master and Mr Jones, he was a very forward thinking teacher. Then there was various lady teachers who took the infants, Mr Fenton taught the seniors, Mr Jones the juniors and various other people seemed to come along and teach the infants”.
“We used to play sport on the cricket place now, I used to like cricket. At that time there was a tennis court in the hall grounds. We used to go playing tennis there when I was at school, there was just a few people interested in tennis but not many. The ice house was the place where we used to keep all the nets and things so we would have probably used the original tennis court to the hall which was just over the wall. I can remember skating on the lake [in the hall grounds]. There were a couple of occasions when it was frozen over and you could skate right across it. We had really cold hard winters.”
“Basically [my father] was a horsy person. His brother was a race horse trainer and during the summer we did have horses turned out here from the training. Up until 15 years ago there was always horses around the place in the summer. My father came to Oxton as the stud manager for MacLeans [at the Manor House]. It was their hunting lodge, or their hunting base. The Manor House was always immaculately kept. There was a chauffeur and a Rolls Royce because they spent a lot of time away from here. My dad had to look after the carriage. [The MacLeans] were rich people and they employed a lot of people out of the village, a gardener, chauffeur, butler, chamber maids and goodness knows what else. There were no working horses, they were horses for hunting and pointing and they did quite a bit of breeding. My father was in charge. They had two sons who were very keen on hunting. They had a business in Hungary and an estate in Scotland and this was a very good hunting country, particularly the Belvoir and the Quorn [hunts]. My father was only 20 odd when he got the job. His father got him the job there and that was prior to him getting called to go in the army. My grandfather dealt in hunters. [My father] wasn’t going to be a farmer although his uncle was a farmer in Leicestershire and he had farming connections on his side. He was going to be a horsy man and that was that, but the war came along and he was called up. All the horses round about were taken and bought for a knock down price by the army, even valuable hunting horses and race horses, and you couldn’t do anything about it. That was really when the hunter dealing business finished, it was almost ruined because they got a lot of valuable stock around. And the army just claimed it all. So that was the end of that really. Then of course when the war was over there were no horses left and there was nothing to come back to”
“[The point to point] was a big event [in] Oxton. [It was] built [on] some of the land we farm. We took some hedges out and the jumps were still in there. That was 20 years ago. They were in the hedge with the poles across. It was a very long course, it was over 4 miles, it was gruelling. Where the pond is [on Fallows Lane], the gate a little bit further on from there, that’s the race course gate and the paddock was on the hill side because it was all grass then, it was grass land everywhere then up there. That was where they had the collecting paddock and collecting ring. The start was not far from the settlement”.

“[During the war] food was the main thing on the agenda, you know. The country needed feeding, The country was in a mess wasn’t it after the war and of course there were grants to plough all the grass up and put it in with edible crops, cereals and potatoes and sugar beat etc., so that was when arable farming really significantly got going at that time. [When my father came back from the War], he managed to get a tenancy here. With my mother being a local farmer’s daughter, that helped them get the tenancy. I think Mrs Sherbrooke wasn’t over- keen on father being here because she thought it would just be totally overrun by horses, but he shocked her by not having many horses.

“In the mid to late 60’s we managed to get hold of Wesley House Farm which we rented from the Richardson family. The previous tenant was Mr Swift and he gave up through ill health. The place was very run down and so we able to get hold of it as tenants in 1967 and add it to Windmill farm so it made it a bigger farm. Wesley cottage came with it and we used to let it out to various people. Eventually we were able to buy the cottage and a bit of ground around it. Then we made it into what it is now, into a decent dwelling, and Heather and I went to live there. It was the Methodist or Wesley chapel until 1857, I think, when the “new” one was built. Two families must have lived there who worked on Wesley House Farm at that time, but as long as I’ve known it it’s been one cottage. [The Richardson family] all lived in Wesley House at one time and worked on the farm, but when Mrs Theo Richardson died it was decided that the house should be sold so the Wesley House was then split away in 1967 from the farm buildings.”

“[Oxton is] no longer the village as we knew it where everybody knew everybody, you know. Of course its become attractive to people outside now. Village life as we knew it has gone and young people, there’s nothing here for them much so they tend to move away. 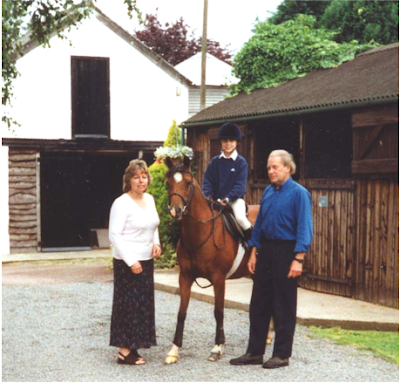