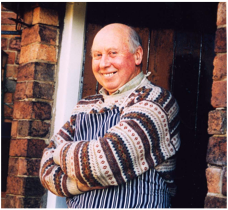 “When I first came to Oxton it was quite a quiet village; we found it a little bit feudal, I think is the word one would use. Apart from that it was a pleasant village and we were soon welcomed by various friends, especially the farming neighbours as we’d come to farm. I was young, inexperienced and it was a steep learning curve really”.

“That was 1962, in the March. I’d come from Broxbourne in Hertfordshire where I was a freelance farm worker and had a small holding as well. The land I rented was owned by an Admiral who’d gone to Malta for two years and the family that rented their house were the Mortensens. It turned out [that] Mrs Mortensen’s father owned an estate in Nottinghamshire. When the other Admiral was coming back to his home in Broxbourne I was frantically going all over the country looking at farms to try and buy or rent and Mrs Mortensen’s husband said ‘well you know Admiral Sherbrooke was letting some farms’, and if I was interested he would put me in touch with the land agent, which is what happened. It was getting harder and harder in the early sixties to rent farms, there were more owner occupiers and landlords were beginning to farm the land themselves and that’s what happened on the Estate here now. I believe when I came the Estate farmed four hundred acres themselves and now there’s only two farm tenants left on the Estate and the Estate I’m sure farm two thousand acres themselves, so that’s the way things have gone. Even when I came there were, ooh, at least six tenant farmers that I can think of off the top of my head. I rented sixteen acres before, and to get a hundred acre farm [here] was quite something,”

“It was starting to go towards arable farming at that time but I personally kept pigs. Although it’s called a dairy farm it hasn’t been a dairy farm since the Second World War. We didn’t really sell very much grain because we used to grind it all and mix it with protein and feed it to the pigs. We kept pigs until 1984/5 when the pig cycle became more and more vicious so that at one time with pigs you didn’t make a profit but you broke even. But latterly the losses have become greater and greater, and there are long periods when you actually lose money”.

“.We managed to bring up three children and educate them privately to start with although towards the end of their education my wife [Gaye] worked at Worksop College and obviously [with] the children there, she got a reduction for being a teacher. Without that we probably wouldn’t have managed it, but certainly in the early years of the children’s education the farm provided a living for us as a family and we managed to educate them but having said that we weren’t able to expand our farming enterprise like some of our friends who sent their children to state schools and concentrated on expanding their farming enterprise, but you make a choice and stick with it. After pigs in 1984/5, we were just purely arable, because the children had grown up so one’s needs were not as great, so you live according to what you’ve got. I’ve never been a great one for long holidays, I save money there!”

“Labour is the most expensive item these days, machinery is getting much more expensive. Tractors in those days cost eight hundred pounds each new and now, well you know, anywhere from twenty five thousand to sixty five thousand so for a small farm twenty five thousand is hardly justified. At the moment I’m still using equipment that I bought years ago, and while it will keep doing the job it won’t do it as quickly as the more modern machines. More and more farmers are having the sugar beet crop for instance lifted by contractors who come in with a machine that lifts six rows at a time, goes at great speed and does the job extremely quickly, and that seems to be the way things are going. Combines have got bigger. And this has also brought about another change in farming where there used to be a lot of labour and there was a lot of camaraderie and good will and high spirits and pride in how you did things, whereas now you get one man and an enormous tractor who never sees anyone else all day for day after day after day, which is a great shame”.

“The size of the farm really dictates what we can do and if we wanted to go back into live stock the capital investment would be enormous. Over the past two or three years all branches of agriculture have been struggling to make any money at all. There are a few people who find a niche market, farmers sometimes have diversified into farm parks but there’s only room for a certain number of those and you’ve got to do it extremely well. Farm shops are the same, [they] are extremely hard work if you’re going to make a success of it”.

“When we agreed to rent the farm they said they would get electricity installed by the time we arrived. In actual fact we were here for six months before we got electricity, so we had paraffin lamps, we did a lot of cooking on a primus stove and things like that. We had our electrical gadgets sitting in the kitchen unable to use them. Electricity had to come across the fields from Halam”.

“I’ve made an awful lot of friends both in farming and outside farming. Only recently I said to Charles Doughty ‘do you think I’ve been accepted in Oxton after thirty nine years Charles’. He said ‘ooh yes, certainly have, but you’re still a foreigner’ But now I’m involved with the Church and, and various things, bell ringing and one gets a lot of fellowship and friendship from these activities.

“We have various other things instigated by the Church, we have a Harvest supper which is usually very enjoyable with a barn dance. We do have a Rogation Day service usually here at the farm on the lawn, an outdoor service, and the crops are blessed and the live stock and they’re all things in the Church calendar that are traditions that should be kept going. It would be nice to see a few more. We’ve revived the Plough Sunday service in Oxton itself and we borrow a horse plough from a friend and bring it into Church with a milk churn. Oxton, I would say, has become a commuter village on the whole but it’s nice that there are a lot of local people still, and I think we should try and keep these traditions going, and hopefully some of the new people or incomers as they’re called by some, will join in. There are a lot of people who come to the village who certainly participate in village life. In fact you could almost say that in some ways the newcomers have kept a lot of things going”.

“When I first came to Oxton we didn’t have many winter sewn crops,so you spent the autumn ploughing the land. You attempted on the heavy land to get it ploughed by Christmas so that the frost would work on it. But now with modern machinery you plough and you force the seed bed as quickly as possible. Here we have red clay that [is] not too difficult to work but you have to be very patient with it because you soon spoil the structure if you go on it while it’s too wet. If you get a shower of rain it can go very sticky on top. When you get down in to Oxton village itself, the other side of the bypass, it’s blow-away sand and in the spring sometimes when we get the wind, half the field finishes up on the road! When I kept my pigs I used to put some outside in the summer but if it rained you had a terrible quagmire. Black pigs don’t suffer from [sunburn] but most pigs are white these days and you have to make a wallow for them so that they can get in and get muddy and almost coat themselves in mud”.

“I personally enjoyed farming more when the farms were smaller and you had more people working with you. We seemed to make time to stop and when my wife brought the children home from school at harvest time she would bring tea and we would all sit next to the combine, not for long, and have a family tea in the field. I think the children remember it and did enjoy it”.

“One of my children’s fairly interested [in farming] but I think he thought there wasn’t room on this particular farm for two families to make a living and he now works in insurance services or something and he certainly makes a lot more money than I do, judging by his life style”.

“I don’t think it’s a well known fact that Britain is an exporter of grain it’s the world’s fifth largest exporter of grain, but we’ve come a long way, we used to grow a ton to the acre and we now grow three to four tons to the acre. Without the E.U. support, grain at fifty seven pounds a ton is not really viable. You may find a few farmers on a very large scale who farm two thousand acres with two men and a few contractors who keep the costs down, but their capital investment will be very great for the machines to do it with such a low labour input, so the whole of farming really at the moment is in the melting pot”.

“I think I’ve been privileged to spend my life doing what I set out to do, doing what I wanted to do, because there’s a lot of people that finish up doing jobs that were their second choice. I would have liked to have become a bigger farmer in a way because well most farmers do and it seems the way forward”. 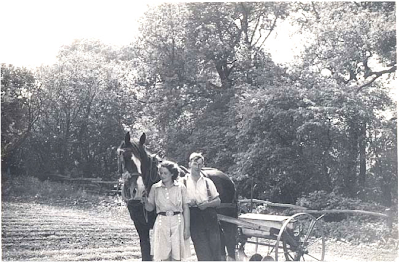