“[Oxton] struck me as a very pleasant place, a mixture of all sorts of buildings, some of them but not many dating back a long way, beyond 300 years, many of them Victorian and post war, the small old people’s cottages. What I and my wife did like about it was that it seemed to divide itself nicely into two parts, geographically but not from the point of view of the people. Just beyond the church there was a very pleasant open space where the village hall is: a sort of breathing space in the middle of the village though of course responded on the other side by the old halls’ gardens. You would normally expect that to separate the village, but not in this case. The whole of the village seems to be one unit hanging around the central main road, Main Street, which becomes Forest Road”.

“The bricks that this house [Wesley House] were built of are just straight raw material, it is that colour because the clay makes it that colour. They were sourced locally and brought by horse and cart.”

“We have three chimneys. As gas fires, boilers and electric heating and that sort of thing came in after the war, the chimney slowly disappeared because the television took over the centre of focus and the fireplace disappeared. So the chimney disappeared, and houses look to me unfinished now. Ours are about 3 foot long, or metric 1 metre by certainly two bricks wide [with] a pot on top, now that’s a chimney. And it makes the house look right.”

“Not enough care is taken to list those [buildings] which are either of local or valuable historic presence, and also that maybe separately have some character. When you can get the two combined it is excellent But the old forge, now listed, has a place in the history of the village”.

“[We have a well which] is 16 foot something deep and it’s at the front, yes just at the front door. It’ s circular and is brick and it’s now slabbed over so that you can’t fall into it”.

“The foundations [of the house] could have been brick or stone. This side [of Forest Road] is sand or clay and the other side is either clay or sand I’m not quite sure which side has which, I suspect this is clay but I’m not sure. Clay’s dodgy stuff, sand is much better”

“The beauty about the older houses, the really old ones, three hundred years, they bend not entirely but they flex where as modern houses with tighter joints don’t; they break or shear. [Our house is] long and thin and the [subsidence] wave went through this way underneath and therefore we were like a ship, we were either on two crests or we were on a crest in the centre and we had a crack about two inches wide. Our cellar, which has a brick arch and brick floor, bloomed up because it was in compression. The thing was bending and then it went the other way. 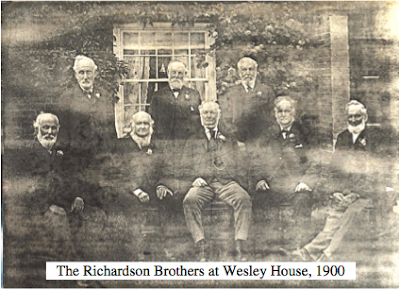