Thanks to Robert Smith of the Sherwood Archaeological Society, we are able to publish the following items of interest here:

And thanks to Dr Dan Brown of Nottingham Trent University we have links to some fascinating work that he has supervised at Old Ox camp showing the camp in 3D by day and its stellar landscape by night. 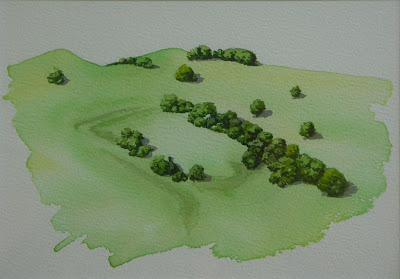 The most prominent and a very enigmatic archaeological feature of Oxton is the Old Ox camp towards the top of Windmill Hill, and the two tumuli that overlook it. Apparently, this is but one of a chain of Iron Age sites in Nottinghamshire. The Sherwood Archaeological Society recommends the book “The Coritani: Peoples of Roman Britain” by Malcolm Todd, on the subject of the pre-Roman civilisation of our area.

The following was compiled by Robert Smith of the Sherwood Archaeological Society, who has kindly given his permission to reproduce here.

I have put together here some bits about Old OX and there is some good work that could be done on the ground such as some systematic field walking. Which never comes amiss!

This is the map which we did after our excavation at Dorket Head, it shows some of the string of Iron Age hill forts which roughly follow the Trent. Some were reused in Roman times and all could do with a lot more research.

The following is a piece from the Transactions of the Thoroton Society about Hayman Rooke digging the tumulus on the hill just NW of Old OX. And finding some metalwork, now lost!!

Rooke also carried out some excavation himself in the forest; on 20th October 1789 he opened the smallest of the three tumuli he had recorded about a mile from Oxton [1]

formed with a very fine mould, [opended] to a depth of seven and a half feet from the top to a little below natural soil. Here we came to a kind of grey sand mixed with clay about 5 inches thick, some parts of which were moist: on this lay an urn half full of ashes and covered with a piece of coarse baked earth, which broke when taken up. On examining this urn, to my great surprise it appeared to be covered with rust .,… on one side and at the bottom is a piece of wood which sticks to the urn, and several small pieces were found near it, which, from their shape, being hollowed out, evidently appeared to have been stuck to the urn. Near the urn was a sword in a wooden scabbard ….. near the end of the sword fifteen glass beads were picked up. Other fragments of iron and brass were also found, including an iron dagger.

Nine days after this excavation Rooke discovered what he described as

a considerable part of a very large camp, which probably contained the main body of the Roman army

My informant, an old farmer, assured me he remembers the camp complete, extending a long way into the adjoining field, and he is certain it was twice the length of what is now distinguishable.

In the same area as the tumulus, about half a mile east of Oldox, Robert Lowe (author of A View of the Agriculture of Notts. (1794), to which Rooke contributed an account of ‘The Mays of Birkland and Bilhagh’) pointed out to him an ancient work called Lovely Grange, three sides of a rectangular enclosure with a ditch and vallum, 314 yds. by 67 yds.

Another curious monument, consisting of two concentric rectangular ditches, the smaller being 54 ft. by 66 ft. was noted about one and a half miles west of Oxton.

2 For the exact location of this site see D. F. Maereth in East Midland Arch. Bulletin, 1961.

Hayman Rooke was walking about the countryside at the end of the 18th. C. when lots of earthworks were visible that are not apparent today. Several of them are around Oxton and could be tracked down. This Lonely Grange for instance that is mentioned, where is that? And others.

The following is some of the report that Brian Symmons did in the 1960s after We had excavated at Combs farm at Farnslield. He includes a sketch of Old Ox and a few remarks, but to my knowledge it has never had a proper survey or excavation. Nor has the whole system of Iron Age hill forts in Nottinghamshire been reviewed as a whole and written up.

lf you want to see for yourself what there is, it is all available at the Local Studies section at Nottingham Library.

South of Combs Farm, one and a quarter miles away and situated on the Oxton Ramper, a long ridge of Keuper Marl and Waterstones, is a structure known as Old Ox or Hodox. The summit of the ridge is no more than 200 to 300 yds. away from the earthworks and overlooks them; although the earthworks when viewed in plan (Fig. 4) might well be said to be defensive in purpose the vulnerable position makes this hard to believe.

The camp is surrounded by a double bank and a single ditch except on the east, where there is a triple bank and double ditch. Its strength is also augmented by the steep escarpment of the hill on the south and east. There is a well- defined entrance at the south»east.
Very little is known of Old Ox and varied assessments of its use have been made. These range from a deer enclosure to an Iron Age hill-slope fort. Much detailed Work requires to be done on this site but a scatter of Romano-British pottery and worked ilints in the field immediately to the south of the earthworlc shows that there was some Roman and pre-Roman activity hereabouts. The pottery and ilints found here are much the same as those found at Combs Farm. Three-quarters of a mile away from this spot in an easterly direction a much larger scatter of Romano-“British pottery has been found. This is at Fallows Farm, Oxton, and may well prove to be the site of another of these enigmatic Nottinghamshire enclosures referred to in the Victoria County History as Lonely Grange.

Oxton village lies in the valley to the south of the ridge on which Old Ox is situated. Fox Wood is the next earthworks going south and the parish boundary between Calverton and Woodborough runs through it. The earthworks themselves straddle a long ridge carrying a trackway which is also a parish boundary. As the present day name implies the area is wooded, and so thickly that little can be seen on the ground of the complexity of the site. Mr. Adrian Oswald says:

The camp at Fox Wood is noted in the Victoria County History, but there is an extension of the earthworks to the east which is not shown. Here on ploughland the writer has found Iron Age and 3rd century Roman pottery.

Further finds here have been of hard grey Romano~British pottery (found in 1947 by Mr. H. Wildgoose) and in the spring of 1961 two sherds of Nene Valley colour-coated ware together with other Romano-British sherds. From the village of Calverton and three~ quarters of a mile away from Fox Wood two coin hoards of the late 3rd century have recently been found.